Yet another Midtown office to rent snapped up! Global real estate specialist Tishman Speyer is the latest to purchase as London’s Midtown market continues to thrive.

The company has snapped up a 328,000 sq ft office building at 33 Holborn. The property currently serves as the HQ office for Sainsbury’s whose lease on the building lasts until 2026.

With its HQ-standard specification, this Midtown office to rent is prime real estate in a market which continues to surge in popularity. As Tishman Speyer’s Dan Nicholson says; “33 Holborn is a top quality building within a micro-market that is growing rapidly in strategic importance within London.  This is evidenced by the demand in this location from major companies across a broad range of sectors.”

The building is situated just 200 yards from Farringdon Station which will serve as the site of the new Crossrail service from 2018. This long awaited transport service will ease pressure on the capital’s existing transport infrastructure, making key Midtown locations more easily accessible. Transport for London believes that it will act as a “catalyst for regeneration”, transforming key locations along the route into destinations in their own right. 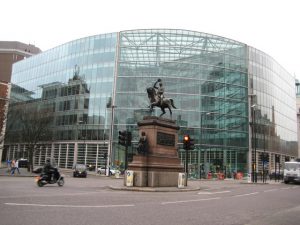 This, however, is not the only reason for Midtown’s sudden rise in popularity. This key region of Central London, which encompasses high-profile areas including King’s Cross, Euston, Covent Garden and Holborn, has attracted attention from several global tech giants. Google’s forthcoming groundscraper at King’s Cross needs no introduction. It is currently due to open in 2017, although the revised plans for the building – the search giant decided more ambitious designs were needed – have yet to be revealed.

Serviced office providers have been quick to seize on the trend; most notably The Office Group, who are to launch three new business centres within the King’s Cross regeneration zone.

Closer to Tishman Speyer’s new Midtown office to rent, Amazon last year moved into Sixty London in Holborn, taking up sole occupancy of the striking new building. Again, serviced office providers have been quick to follow suit, making plans to launch new business centres in the Holborn area of Midtown and ensuring that the area is well served by serviced options too.

Looking for a Midtown office to rent? Find out more below: