Growth across the UK as whole might be slow but the London office market is showing no signs of slowing down. We look ahead to some of the most important developments of London offices to let still to come in 2013.

Planning permission for Google’s £1 billion King’s Cross office are due to be submitted by June 2013.

The search giant has promised a building which will challenge the traditional office space concept, pushing the parameters of both building and design. So far, the only detail they have revealed is that it will focus on stairs not lifts. Those keen to get a glimpse of the future of work space design will be eagerly awaiting more details.

With the Buckingham Gate development due for completion in May this year, Land Securities’ ambitious regeneration of Victoria is beginning to take shape. The 11-storey building at 62 Buckingham Gate will provide 256,970 sq. ft. of London offices to let in a contemporary, glass-fronted structure. It is the latest in an extension programme of offices and mixed used developments scheduled for construction in the area.

Work to begin on Scalpel London offices to let

Another year, another iconic skyscraper for the City. This time it’s the Scalpel on Lime Street, which was given the green light by City planners in January. Work on the 35-storey skyscraper is due to start later this year. Once complete, it will provide 500,000 sq. ft. of London offices to let and will be the European HQ for US insurance company W. R. Berkley. The insurers are investing £500 million into development of the site.

Following the call for revised designs, City Planners are hoping that work on the stalled London offices to let within the Pinnacle can restart this year. The new design is yet to be revealed but the brief was for a more cost-effective building, with more practical floor plates. 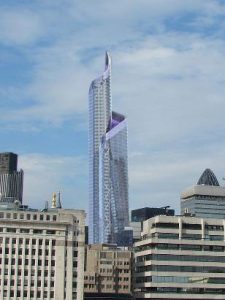 More pre-lets at the Walkie-Talkie

The developers behind the Pinnacle and the Scalpel have good reason to be optimistic, with the Walkie-Talkie proving the continuing popularity of high-rise London offices to let in the City. The building at 20 Fenchurch Street has already secured 50% pre-let although it isn’t due for completion until April 2014. Developers Land Securities will be looking to secure more pre-lets before the year is out.

Popular pre-lets in the West End

It isn’t just the City that is attracting pre-lets. Over in the West End, the developers behind Wigmore Street Island (aka 95 Wigmore Street) recently reported that office space in the building is almost completely pre-let.

Bridgepoint and Lane Clark & Peacock have taken pre-lets on the site amounting to almost 70,000 sq. ft. of space, leaving just 12,890 sq. ft. of available London offices to let. The development is due for completion in 2013.