It’s not due for completion until 2014, but the City’s newest icon, the Cheesegrater, is already 51% pre-let after securing its latest tenant for its offices to let in London.

Insurer Amlin has agreed to pre-let 111,000 sq. ft. of space within these iconic new offices to let in London, spanning floors 18 to 24, plus space on the 45th floor. They will join risk management firm Aon, who have agreed a pre-let on 190,000 sq. ft. of office space on the site.

Officially known as the Leadenhall Building, the Cheesegrater will provide a total of 610,000 sq. ft. of new Grade A office space at the heart of the City. At 736 ft. high, it occupies a prominent position opposite Lloyd’s of London, with views of the Gherkin, another 21st Century London landmark. 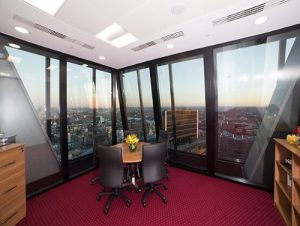 Speaking about his company’s decision to move to the Cheesegrater’s offices to let in London, Charles Philipps, Chief Executive of Amlin plc described it as “an uplifting new office” in an “unbeatable location”.

British Land are developing the building as a joint venture with Oxford Properties. Their Chief Executive, Chris Grigg, said, “This significant second letting confirms The Leadenhall Building as a world-class building. We are very pleased to be in business with a company of the standing of Amlin, a market leader in the insurance sector.” 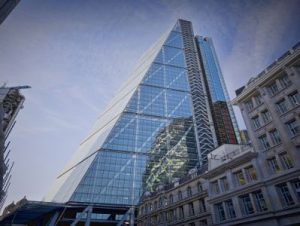 The pre-let success of the Cheesegrater’s offices to let in London is likely to be a relief to its developers, coming at a time when several of London’s latest skyscrapers have struggled to translate admiration into lettings.

Last month saw a change in fortunes for the Shard which finally acquired its first tenant, more than six months after completion. The Pinnacle, meanwhile, is still awaiting a final decision on new designs, which will see a more modest and practical building on the site.

The Cheesegrater’s offices to let in London are proving a more popular choice among high-profile businesses. Work on the building is moving ever closer to topping out, with glazing work continuing over the next few months. The project is expected to reach completion in mid-2014.

Looking for office space in The City? Browse our handpicked selection of  offices in EC3.